Animal behaviors can become concerning without any explanation. Some people have found that satellites not only affect human hearing but also animals. Companion animals also may be irritated by the HF sounds known as satellite tinnitus. Often they will meow incessantly or exhibit other abnormal behaviors during these events linked to satellites.
Tracking the satellites and looking them up for a couple weeks at a time is easy to do.  In 5-10 minutes you can learn to save screenshots of the satellites during the time of these invisible events. This exercise helps to understand what is in the environment above us.
It is difficult to pinpoint everything since satellites are not alone in the sky. Aerial surveillance by plane, helicopter, and drones also coordinate cyberattacks on home computers even in rural areas. They can also hack using signals. There are other app trackers for plane flight paths.
There is an organization website called https://in-the-sky.org/ that has tools to track Spacecraft (satellites and space stations). It's a fun and easy way to see what's setting like the sun throughout your day.
Simply go to the website https://in-the-sky.org/ and click on the Spacecraft menu.
Then click on "Satellites in your sky" (you should be on the "Live Map of Satellite Positions" page)
On the right side, there is a gray bar that has a location box. Click on Change Location if you are using a VPN to get your desired view of the sky. You can either select your town in from the provided list or specifically  enter coordinates obtained by:
dropping a pin on Google Maps for coordinates  or search for town coordinates at:
1. LatLong.net
2. GPS  https://www.gps-latitude-longitude.com/address-to-longitude-latitude-gps-coordinates.
After inputting the coordinates and setting your town, you can return to the "Satellites in your Sky" page
Be sure to click on "set time to now" every so often
Under "Brightness limit" select "include objects in Earth's shadow" to get the maximal view of spacecraft you select below the sky.
Scroll past the circle to "Select Satellites"
Then, select the satellite types you wish to view.
Below is a list of my favorites to check during serious satellite tinnitus occurrences or another directed broadcast of sound, image, or video:
1. Bright Satellites: I usually take a screenshot of the Starlink Satellites on the map and then deselect them due to the amount of clutter in the way to view other satellites. Sometimes Starlink makes a wide band across the map like a smiley face. It's not cute when Satellite Tinnitus (HF) is going crazy. 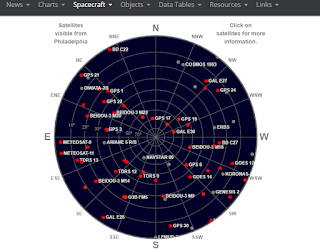 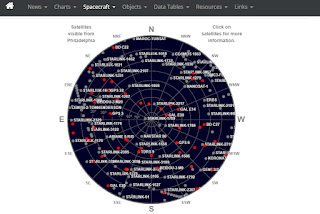 2.  Earth Monitoring:  Earth Resources, Search and Rescue, Disaster Monitoring, Tracking, and Data
2a.  A list of Earth Monitoring transmission frequencies that come close to the range that audible satellite tinnitus is heard at can be found at wikipedia:
Earth monitoring transmission frequencies at https://en.wikipedia.org/wiki/Earth_observation_satellites_transmission_frequencies
3. Amateur Radio, Experimental, Other Comm, Iridium
4. Navigation: GPS (USA), Beidou (China)
5. Scientific:  Education
6. Miscellaneous: Miscellaneous Military
Though this is one method used to look up satellites;- the GPS system is known to target individuals.
It is still inconclusive to use, though according to Richard Lighthouse, a former NASA engineer, GPS satellites are usually above or due south when targeting happens. And, these satellites target the top of a person's head without an implant. Please look for his E-books online about Cell Towers too.
We hope this information helps to ease the unknown.