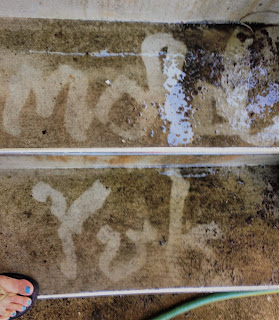 My battle against Mold spores took 5 years for it to clear my blood under the microscope. It's now 7 entire years from when I was initially exposed to Toxic Mold.  I'm eternally grateful for my nutritionist and staff and wonderful healers who I've learned from and met on this recovery journey. And, I finally was able to access my photos from 6/2013 when I first came in contact with this Biotoxin. So, here's a picture of stachybotrys giving off mycotoxins coating the front walk, stairs, and entrance. This was a place I found on Honolulu-Craigslist.  From the day I was covered, head to toe in toxic mold from the power sprayer.
It was meant to be a temporary home for 2 months before I returned to the Mainland USA. Instead, It became part of my ongoing battle with mold exposure. I should never eat a lot of carbohydrates for the rest of my life. There is residual effect of the mold that remains. I first visited the Nutritionist in February 2014. However, I didn't know it was so serious I had to detox until April 2014.


Though I was cleared from larger mold spores in my blood, I was given the warning that 'it can come back" if I eat too many carbohydrates and sugars. And, after being Keto-Vegan for so long;- It seems it is due to a hypoglycemic state that I enter food comas and sleep for over 10 hours. Something I couldn't do in ketosis. This is why I spend hours self isolating and in meditation.

Today, I become sick with allergies and other issues when I continue eating plant based -vegan carbohydrates for extended periods of time. Eating ketogenic-vegan is still critical for my health. Luckily, my mom cooks some Japanese style shiitake, tofu, seaweed soup when I'm home. So, I get some authentic Japanese, homestyle, vegan cooking (except when my noodles weakness sets in).
The noodles and rice change my frequency enough that I'm quickly in food comas and sniffling with resurgence of allergies. Food allergies including gmo type raw foods such as soy, corn, grain, fruits, are ironic in this vegan's diet. BAD for me, though now a debilitating luxury. Back to ketosis I go!

My favorites after weaning off the vegan mold detox diet for the first 3+months have definitely changed. I still love raw organic beets. However, I'm a little bit over the texture of avocados. And, what I define as 'low carbohydrates' is less than 30 grams of carbs. For the beginning of the Vegan-Mold detox I did, I had less than 7-15 grams of carbs daily. And, those were not piled on. Rather digested intermittently throughout my day. I did sunflower sprouts, with barely a small pinch of beets. (carrots, and potato were added later).  That was a big deal for me to add after I was given the clear to add a modest amount of carbs back into my diet via raw salad.